Baobabs are extraordinary trees that are in great danger of dying out. Forest of Imagination would like everyone to be inspired by these magnificent species and all the creatures that coexist in their environment and help to conserve their unique home in Madagascar.

Madagascar was once a place of skinny, spiky trees and giant birds and it was a very uncomfortable and dry and not very fun place to live. The lemurs of the island got bored with this and decided to create some new features that would make the island a bit more unusual and joyful. One idea they had was to make big fat trees that look like giant balloons stuck into the ground. They would be every colour under the rainbow and they would sing. It took a while but they discovered that if they dribbled water into the tops of the skinny baobabs that they filled up and swelled, just like filling a toy balloon with water. Getting baobabs to sing was not very successful, the best they could get was a sort of splat sound when the trees fell over. Even getting different colours proved too difficult with most baobabs refusing to be anything other than a sort of silvery brown. Despite these problems, the funny shaped, bulbous trees made the lemurs very happy and they committed to making all the skinny baobabs in the country into giants. 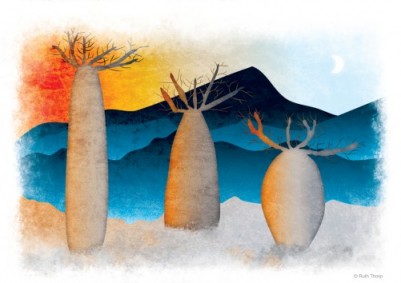 s, the landscape looked very different with these magnificent trees rising up out of the spiny forests and glowing in the sunrise and sunset. 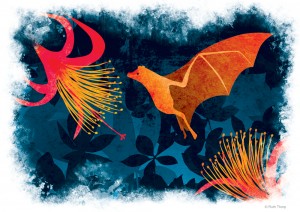 Many other animals and birds were attracted to these spectacular baobab forests including colour changing chameleons and at night, bats and moths flew around the forests attracted by the amazing baobab flowers. The lemurs continued to experiment and one adventurous individual thought it might be interesting to blow up a chameleon to see if they could match the baobabs. The only thing that happened was that the chameleon’s eyes popped out on stalks and began to look in different directions at the same time. The chameleon realised this was a pretty good skill and ever since all chameleons have been inflated by lemurs.

In more recent times the lemurs have had new ideas about escaping to the Moon and have transferred their efforts into other experiments using solar power and time travel. They have started to lose their traditional skills for blowing up chameleons and filling baobabs with water and now the forests are starting to feel very neglected. 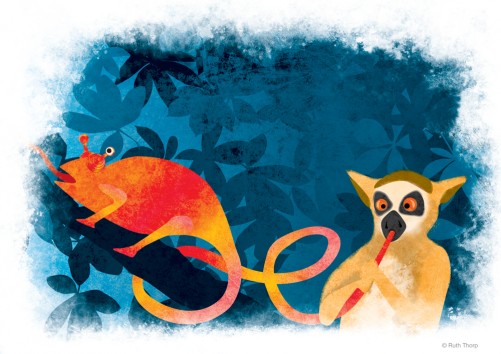 The future of baobab forests has now transferred to the humans living in and around the forest. These don’t have any skills in chameleon blowing or baobab fattening but they are good at gardening and quite clever at making money from things around them. For a while they thought the best thing was to burn all the trees and to eat the animals. This was a bit much for the hissing cockroaches who made a pact to use their mind-warping abilities to alter human behaviour. This was a bit tricky as it needed 10,000 cockroaches, arranged in a very wobbly and noisy hissing cockroach pyramid, just to control 1 person. It worked though and now the big human idea is to use the very special character of the forests and all the animals and birds and plants and to attract people from all over the world to come and visit these amazing places and spend their money there. 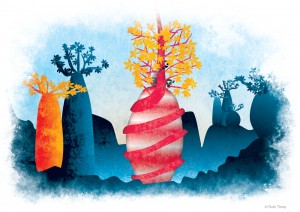 Meanwhile the lemurs are working away on their experiments and we have heard that at least one blue eyed black lemur has travelled into the future and brought back a new species of baobab never before seen on earth. It has red and pink horizontal stripes, is as fat as an elephant and has a single branch that twirls and spirals around the trunk creating a pathway from the ground up to the sky. They don’t know what purpose this branch has but can you imagine the future baobab forest of Madagascar full of such extraordinary trees? Perhaps these ones will even sing and form a choir of baobabs, lemurs and hissing cockroaches that can be heard in space.

Written by Andrew Grant with illustrations by Ruth Thorp

Baobabs have spindly branches and bulbous trunks that sometimes makes them look like they have been blown up like a big balloon and have been planted upside down.

They are a special type of tree that is mainly found in Madagascar where they live in the dry and spiny forests. To survive the drought periods they shed their leaves to reduce the loss of water through transpiration and are able to store huge quantities of water in their trunks (perhaps as much as 100,000 litres). They are important to the local people as well as many species of wildlife but with the loss of their forest habitats to fire and farming most of these amazing species are endangered.

Baobabs are the larger than life personalities of the Madagascar forests and many have become local landmarks or sacred places. They have large exotic flowers that attract many nocturnal creatures including bats and moths and even Lemurs. Their fruits, seeds, leaves, bark and timber are highly valued by locals and turned into medicines, rope and food. 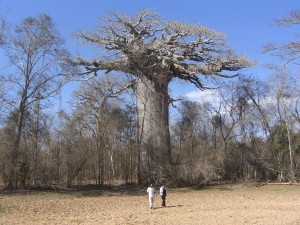 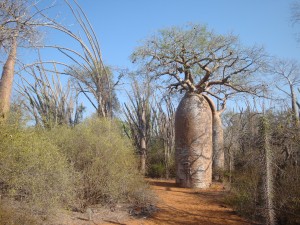 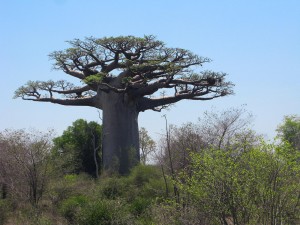 There are six species of baobab in Madagascar and the most famous is Adansonia grandidieri. This is the largest and most threatened member of the baobab family. It can grow up to 30m high and can have a trunk 7m in diameter. Some of these specimens are said to be over 1500 years old and there is a famous collection of them at the Avenue of Baobabs near Morondava in western Madagascar.

Adansonia rubrostipa is another important baobab species which really does look like a bottle tree because of the way the trunk narrows down just beneath the branches of the canopy. This is one of the smallest of the Madagascar baobabs typically growing upto 4- 5m high but still with a big fat trunk. Its flowers are yellow/orange.

The last one of our collection is Adansonia madagascariensis. This species is a rare, small to large deciduous tree, 5-20m tall by about 12 m in spread. It is has massive succulent trunks with comparatively small, sparse, irregular compact crowns and with erect, pink-red flowers. It is rarely cultivated.

Guardians of the Forest

The magnificent Baobab tree, also known as the Guardian of the Forest, plays a central role in the Forest of Imagination this year. We want to share this incredible species with you and will be bringing three of these outstanding and towering trees to the streets of Bath – directly to you.

Forest of Imagination would like everyone to be inspired by this wonderful species and all the creatures that coexist in their environment and help to conserve their unique home in Madagascar.

In Madagascar, six of the eight global species of the magnificent Baobab can be found. These extraordinary trees are renowned for their giant stature and vast trunks. Their distinctive branches and canopies – which soar far above the ground – appear, almost, as if the tree is upside down with its roots reaching to the sky. 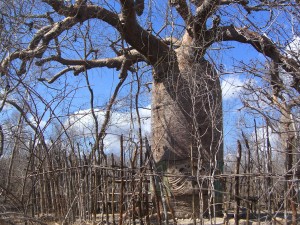 The oldest Baobab specimens are thought to be at least 400 years old although some could perhaps be as old as 1,500 years! These gigantic trees store water, up to an incredible 100,000 litres, in their trunk to endure the harsh droughts particular to their habitat – two species are also found in Africa and one in Australia. In Madagascar, the flowers of the tree are pollinated by nocturnal species including the beautiful Hawk Moth and local Fruit Bats. Their fruits, seeds, leaves, bark and timber are highly valued by locals and turned into medicines, rope and food.

Ancient stories and sacred mysteries surround this exceptional species including the notion that spirits dwell inside their cavernous trunks, inspiring local people to offer food and money as gifts to the spirits. The survival and importance of these magnificent trees in Madagascar is crucial. Climate change, de-forestation and human development is destroying the habitat that is central to the survival of this rare tree species.

Andrew Grant has designed three Baobabs for the Forest of Imagination – see drawings above. These inflatable Baobab trees follow on from the huge success of Dreamer, our giant inflatable bunny – also designed by Andrew Grant, who appeared in Queens Square last year. This year, Designs in Air will once again work with Andrew to create the Baobab Trees which will tower above the Forest of Imagination to inspire and protect us all in their role as Guardians of the Forests and in turn we will learn to protect them in our role as Guardians of the Globe. 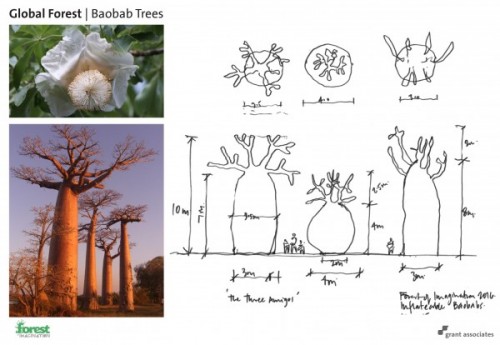 We are bringing three species of Baobab to Bath this year including, Adansonia Grandideri – the biggest and most famous, Adansonia Rubrostipa a species endemic to Madagascar’s dry deciduous forests and Adansonia Madagascariensis – the rarest of the species.

The Forest of Imagination want to share with you how important forests are. All over the world, forests  both global and local are essential to the health and survival of many species of animals, birds, insects, flowers and fauna, they are fundamental to the wellbeing of our environment and of course to the people who live, play and survive in and around the forest.